How to meet without any intention? Allowing the kinship to be enough, as its own, is a primary Sámi value. This is the indigenous ground for the fight against the exploitation of natural resources and of culture.

What if you wouldn’t leave any trace of human activity behind, any material of your own?

These two are starting from staring. A state of being that is nothingness, intense nothingness. Ephemeral, like it is to be as a human being.

A start without talking. Locking the eyes, dragging the gaze along. Reaching the other one. Creating suspense - or is that suspicion? Waiting for something to move. Reacting, intimidating, discovering playfulness. Somehow important, somehow tensed. Leaving.

This piece was created in the frame of Art & Land - EU Sámi week in Brussels, to be premiered in Beursschouwburg 21.6.2022 with the support of The Finnish Cultural Institute for the Benelux, Saami Council, Suoma Sámi Nuorat and Riddu Riđđu Festivála

Birit Haarla is a dancer, performer and choreographer coming from Dalvadas, Ohcejohka, the Finnish side of Sápmi. Together with Katja Haarla she has collaborated with visual artist Marja Helander on an award winning short film Eatnanvuloš Lottit, Sundance Film Festival 2018. Now she works with theater director Pauliina Feodoroff on a collective performance Matriarchy, presented in The Sámi Pavilion, La Biennale di Venezia 2022. She is interested to work on how caring for one’s body intertwines with the relation to the environment and how to use playfulness in performativity in order to stand for the rights of the Sámi area as a whole.

Katja Haarla is a performer, dancer and choreographer coming from Dalvadas, Ohcejohka (Utsjoki), the Finnish side of Sápmi. She graduated from the Finnish National Opera Ballet School in 2019 and since then has been collaborating with Birit Haarla, her twin, colleague and dear friend. They worked together with visual artist Marja Helander on an award winning short film Eatnanvuloš Lottit, Sundance Film Festival 2018, with visual artist Outi Pieski on a video installation Guhte Gullá, Helsinki Biennale 2021. Katja is now part of a performance and video installation Matriarchy by Pauliina Feodoroff, presented in The Sámi Pavilion, in Venice Biennale 2022. Lately in her movement research and creative processes of performance, Katja enjoys to orient towards collective ways of existence, to listen and encounter with land and waters, to find joy through dance.

“Starting from Staring” is presented in the Tuesday 28th June 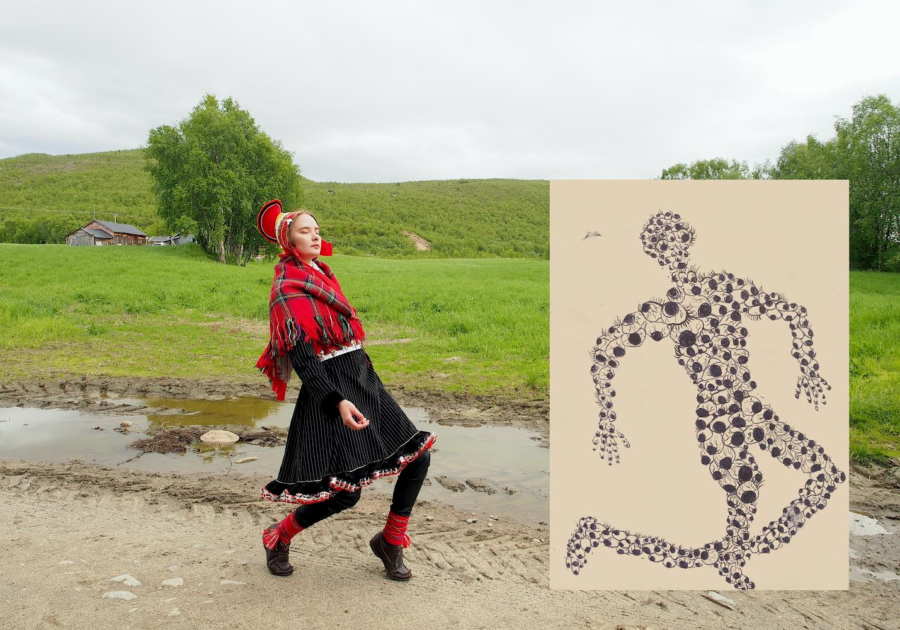